What History Reveals About Women Who Played the Market 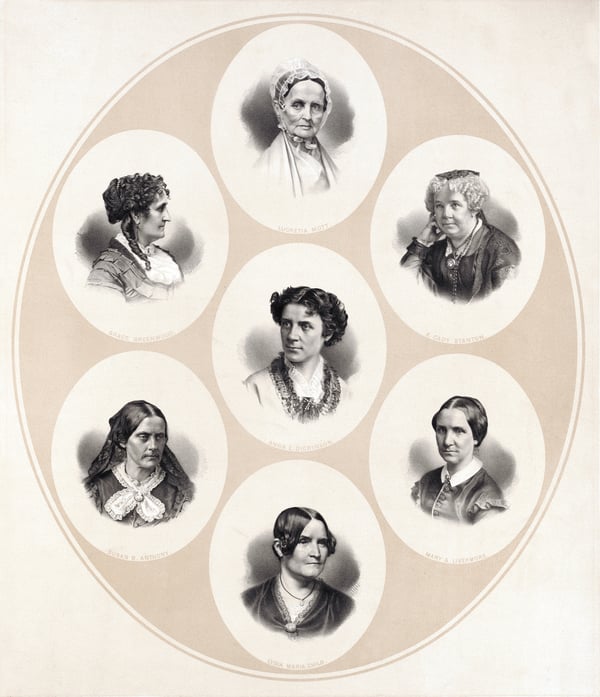 Susan B. Anthony and other women of the suffrage and women’s rights movements.

First of a two-part series on reaching the female investor.

In the mid-19th century, women had no legal standing separate from their husbands—they couldn’t vote, own property, or sign contracts on their own. It was scandalous for them to ride a bicycle. They had little control over their wages, if they received them at all. They were also banned from stockbroking and the bustling trading activity of venues like the New York Stock Exchange.

To play the market, women had to pay hefty commissions to men who would invest on their behalf. To get around the middleman, they began opening their own brokerages, some serving women only, 40 years before they had the right to vote.

Their brokerages were subjected to scorn and ridicule, marked as traps to lure unsuspecting women. Mostly, the women were considered jokes by society.

Today, the most archaic gender-related barriers are gone, but misconceptions linger when it comes to understanding the goals and motivations of female investors.

According to a 2018 State Street Global Advisors report, women associate investing with emotional constructs such as security and independence. They are more collaborative, seek more information, and think long-term.

The data also show that they challenge stereotypes in significant ways.

Women approach investments with the disadvantages of social inequities and added pressures of family care. They generally live longer than men, but make less—women earned 85% of what men earned in 2018, according to the Pew Research Center. Their experience and income accumulation is further slowed by maternity leave and dependent care.

Female mutual fund managers have seen dramatically lower inflows, despite showing no evidence of lower returns. According to a 2018 Bella Private Markets report, women-owned mutual fund firms represent 9.9% of the industry and just 0.8% of its total assets under management.

Women’s asset share, however, is gaining. The numbers indicate they have become a pivotal force. According to Fidelity Investments, by 2030, American women will control two-thirds of the nation’s wealth.

Female Investors Outperform Even in Face of Adversity

Despite reporting more capital-raising challenges than men—and having to sustain profitability with limited assets—women not only don’t underperform their male peers, in some cases, they outperform them.

Women-owned hedge fund firms represent only 4.6% of the industry, according to Fidelity, and control only 1.5% of the total assets. But a 2015 KPMG report on alternatives shows that women-owned and -managed hedge funds have consistently outperformed industry benchmarks. It also shows their funds have a higher percentage of positive months compared to the indices.

Another Fidelity Investments report, from 2017, shows on average women perform better than men by 0.4 percent.

Additionally, a 2001 Quarterly Journal of Economics report, “Boys Will be Boys: Gender, Overconfidence, and Common Stock Investment,” posits that overconfidence leads to excessive trading, citing analysis that shows women turn their portfolios over roughly 53% annually, compared to 77% for men.

As it turns out, these insights into female investing aren’t new. In fact, they were known a century ago. As the women’s rights movement took hold, women began breaking into stockbroking circles, a push that began in the 1880s and gained momentum into the 1920s.

Historical Role of Women Brokers Has Largely Been Overlooked

Histories of Wall Street rarely mention women brokers, writes history professor George Robb in his 2017 article, “Ladies of the Ticker: Pioneering Women Stockbrokers from the 1880s to the 1920s.” Generations of pioneering Wall Street women were consequently overlooked, even as they accomplished what men did through extreme adversity and prejudice.

The Rise of the ‘Ladies of the Ticker’

In her 1929 North American Review article, “Ladies of the Ticker,” published just six months before the Oct. 24 stock market crash, writer Eunice Fuller Barnard describes the rapid ascent of the female speculator, and the powerful lure of the “ticker” for women of varying ages, regions, and socio-economic backgrounds who made windfalls off their investments.

Their numbers were growing almost weekly, an army gambling daily on the markets. In some large corporations, women owned the majority of stock. Some admitted that women made the speculative stock market of 1927-29 as much as men, she reported.

Almost as if out of the woodwork, a vibrant scene of stenographers, heiresses, businesswomen and housewives emerged. A woman farmer in the Midwest called her female broker in New York to buy shares of an automobile stock. She paid $6 for the call and made nearly $2,000 on the investment overnight.

History would come to show, Barnard wrote, that this was a time when “women for the first time in this country on a large scale financially became people.”

History Shows Women, not Men, Made the Stock Buys

Women didn’t have the freedom that men did, or as much money, but they had interest and confidence. In fact, Barnard suggested the rise of the female speculator would do more to win respect for women than the women’s suffrage movement itself.

It was the wife—not the husband—who knew the stock names, as the spouse who interacted with the mail-order houses and answered the doorbell when the gas or electric light company agent came to sell shares in pursuit of consumer ownership. That is how they knew to own public utility stock.

They bought stock in companies whose soundness they knew first-hand. They read stock tips in the tabloid newspapers along with recipes and patterns. They heard market reviews and Wall Street closing prices broadcast on the radio during their “leisure hours” after the dinner dishes were washed.

They Asked the Broker Questions

The woman asked more questions of the broker, and it was she who counseled her husband on which department store stock to buy.

“She better than he knows the relative crush of customers at the five-and-ten-cent stores, in the various chain grocery and drug stores whose stocks are offered on the market,” Barnard wrote.

“Indeed, in many instances waitresses and telephone girls, cooks and washerwomen who, so to speak, stood in with the boss, are said to have invested their mites on a wealthy employer’s advice and cleaned up modest fortunes.”

Their salaries grew as they joined the workforce. They saved more and proceeded more cautiously than men, trained in the school of the small-income economy. Barnard cited an estimate that 85% of the spending in America was in women’s hands as they disposed of income for food, clothes, education and travel. Their role as the family’s investment manager came not long after their inability to write a check was a “standing joke.”

“Why should she not, with her increasing leisure, learn to buy securities for the family’s future, quite as well as fur coats and antique furniture?” she wrote.

Story from Past Holds Message for the Future

It was women, after all, who seized opportunity as the weight of an oppressive society bore down on them. It was them who played the stock market with the boldness of men.

Click the link below for tips on how to make sure your audience hears your message.

Investors have a lot of choices when choosing a manager for their assets. As they conduct their due diligence, will they...