The Opportunities and Dangers of Your Own Fiji Water Girl 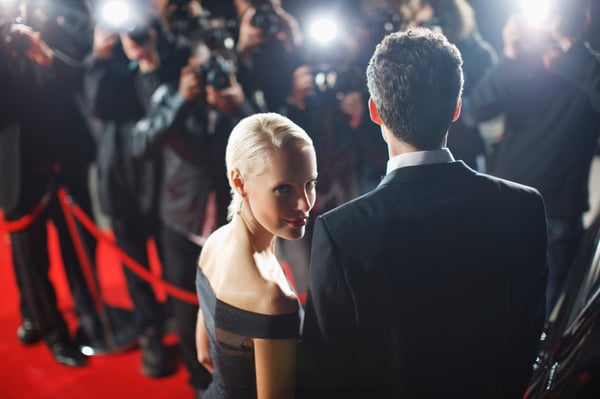 A woman no one knew upstaged all the celebrities on the red carpet at the Golden Globes this year. Because of either a carefully crafted public relations stunt or a lone-wolf model’s attempt at self-promotion, a woman hired to serve Fiji Water found her way into a large number of red carpet photos. Twitter users loved this fetching Zelig, tweeting repeatedly about her coy looks and chutzpah for strategically placing her products – one of which was clearly herself – in view of several cameras. It launched the model, Kelleth Cuthbert, into stardom, at least for a day. She even got the ultimate award in short-attention-span theater: her very own hashtag, #FijiWaterGirl.For its part, Fiji Water embraced the photobomber. "We’re so glad everyone is talking about our water! *senses ominous presence* She’s right behind us, isn’t she? #FIJIwatergirl," Fiji tweeted during the show.

But Fiji appears to not be behind the stunt. There were three other water girls, bedecked in matching Marchesa Notte dresses, but the camera apparently didn’t love them the way it did Cuthbert. And Cuthbert, in an interview with The Los Angeles Times, admitted she was trying to hustle. “It’s all strategic,” she told the paper. “You’ve got to angle.”

And that’s the danger. Rather than well-executed PR strategy, Fiji Water Girl was a supporting actress gone rogue, inserting herself in front of a brand and stealing some of the spotlight. While the knee-jerk accolades made her the First Meme of 2019, there are some serious lessons for other brands – or people – looking to capture klieg lights in a bottle like the ubiquitous Ms. Cuthbert.

Think the Golden Globes liked that it was upstaged by a woman holding a tray of bottled water? Think again. Events allow brands to sponsor them in return for placement, but that placement needs to be subtle. When a brand upstages an event, organizers tend to clamp down on the visibility of products going forward. Fiji may still get the water concession at the Globes next year, but it’s a good bet the servers will be nowhere near the paparazzi. Also, smart event organizers are likely thinking about how the temptation for brands to try to pull off a similar Fiji hijacking affects their own plans.

This Was Actually a Crisis Dressed as Success.

It’s easy to look at the fawning accolades from the Twitterverse and see this event as a PR win. But think of the power this one woman had over the brand. True, all she did was flash a coy smile for the cameras, but what if she raised a certain finger or made some other objectionable gesture? No individual, particularly a contract worker like a model, should have more visibility than the brand that is paying them. Any company using outside workers for marketing or communications should ensure their participation is covered in their crisis-management plans, especially now. There are a number of folks looking for their own Fiji Water Girl moment and that isn’t good.

A Meme Isn’t a Message.

Fiji Water has indeed dominated the Globes, but that can end as quickly as it started. In a social media world, it’s easy to get attention, but time and fame are more fleeting than ever. It’s likely we will see Cuthbert show up over the coming weeks in additional memes about hijacking, fame and photobombing, and some of those will no doubt be funny. None of those, however, will carry Fiji’s brand water. Rather, they will interfere with the messaging Fiji is trying to create around its own company. Brand messages cannot be so easily thrown off track. It’s important for Fiji to re-establish its brand independence from Cuthbert, as tempting as it may be to try to capitalize on the short-term notoriety.