Why You Should Always Proofread Your Copy 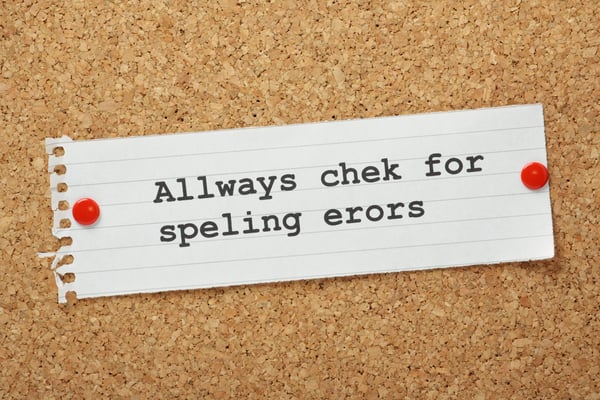 Proofreading is a dying art and we’re all the worse off for it.

We live in an age of instantaneous communication, ready to fire off a tweet, post a Facebook rant, or respond to an email at any time, from any place. In the heat of the moment, good grammar and proper spelling can go out the window. While passion helps fuel your argument, a poorly worded or sloppy message loaded with misspellings is likely to detract from whatever point you are trying to make. And a spell checker or auto-correct will not save you.

Unfortunately, every day it seems like there’s another instance of sloppy or nonexistent proofreading in the news, which makes choosing the best examples all that much harder. But, I’ll start with two from institutions that really should know better.

You’re probably already aware of the gigantic faux pas committed by the Department of Education. In recognition of Black History Month and with what I’ll assume were the best of intentions, the official DOE account tweeted a quote from African-American scholar W.E.B. Du Bois (pronounced doo-BOYZ): “Education must not simply teach work—it must teach life.”

An inspiring aphorism for sure, but since they spelled his name wrong—as “DeBois—that’s what got all the attention. And to make matters worse, later the same day, the original message was re-posted correctly, with this additional statement: “Our deepest apologizes for the earlier typo,” although as any fifth grader could have pointed out, the correct word is “apologies.” Needless to say, the twitterverse erupted in mockery (it didn’t help that newly confirmed Department of Education Secretary Betsy DeVos came off as less-than-prepared herself during her confirmation hearings).

Another more humorous, but just as embarrassing, example comes from the 2012 commencement program for the Lyndon B. Johnson School of Public Affairs at the University of Texas. Unfortunately, no one noticed that the “l” was missing from the word public until after it was printed and distributed. Their apology tweet, “Our deepest apologies to our 2012 graduate for the eggregious typo in our program,” didn’t really make the school look much better. Unlike the DOE, they got “apologies” right, but they misspelled “egregious.”

I know that not everyone is bothered by typographical errors but they should be. Research shows that errors in spelling and grammar cause the reader, particularly if they don’t know the writer personally, to have a negative opinion of that individual. If the communication comes from an institution, that institution’s credibility can be severely compromised.

There’s no denying that running a spell check program can be very helpful, but it should be a final control, not the only one. If auto-correct changes the word “dear” to “dead” or “peanuts” to “penis” a spell checker won’t help you, since those are actually words, just not the right ones. How often have you seen “their” used when the writer meant “there”? Or “to” when the writer really meant “also.” Or vice versa?

Any professional writer or editor can tell you how difficult it is for a writer to proofread their own work. When we read our own words, we often miss mistakes because our brain knows what we intended to say, which isn’t always the same as what’s actually on the page. Ask someone else to read what you’ve written before making it public. It’s quite likely they’ll identify areas where you could be clearer or your message could be misinterpreted, in addition to being able to catch obvious mistakes. After that a spell check can provide a final fail-safe.

The damage you do by sending a typo-loaded email or business proposal to a current or potential client is exponentially more costly than the time you save by getting to the end of the message and quickly hitting send. Do yourself a favor and take the time to make yourself look smarter.